Gordon Ramsay has gained over a dozen Michelin stars and is a celebrity chef and restaurateur.

Through the years we’ve come to know and love Gordon Ramsay for his short temper and some ballistic freak outs on cooking shows like MasterChef, Kitchen Nightmares and Hell’s Kitchen.

While airing, Gordon Ramsay comes up with some zingers and burns that are quite witty, mostly to critique the food he’s eating. “Crap”, “vile”, and “disgusting” are some of his favorite terms. Gordon is also a class-A jerk, who doesn’t like to blow smoke up people’s arse on his show. It might seem like all his savagery is for the television ratings but we suspect something else. Gordon Ramsay might actually dish out burns in his personal life too. Below are some of the best of the best savage moments that Ramsay has served us with.

Although the dish looks decent enough but it wasn’t up to the standards of Gordon Ramsay and he let the twitter user know about it. She asked for it and Gordon was not going to hold back.

This is why I'm not a vegetarian https://t.co/pZObMH0wnb

Aspiring chefs have it hard when they go to Ramsay’s show, he never lets get anything past him.

When they are not up to the par Ramsay lets them know about it and he doesn’t care what anyone else thinks. We might feel sorry for them but it’s funny nonetheless.

This time around all he needed was two slices of bread. He muttered three words to this female contestant and she knew exactly what to say. This is arguably the most famous of Ramsay’s insults, literally sandwiching one’s face with two slices of bread. That got to hurt.

We all know Gordon Ramsay can be savage af but this time around we saw a different side of him, we never knew he could be sassy af too. Throwing the plastic in the recycle bin. 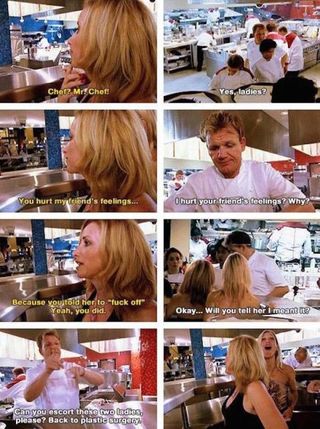 Everyone thought that Ramsay was finally going to dish out a compliment but we were definitely wrong.  Just another classic lead-up followed by a metaphorical bitch slap in the face. 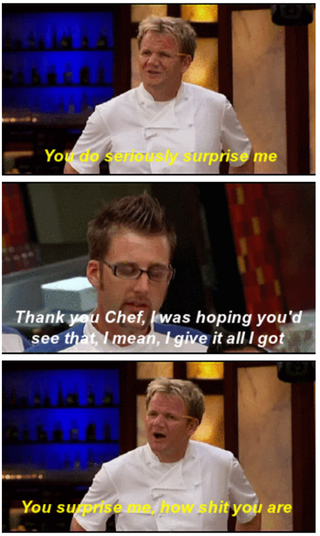 This is the least creative Gordon Ramsay has been however we still can’t stop laughing.

Body shaming, rhyming words and a sprinkle of F-bombs. This has all the ingredients to be the ultimate GR burn.

Our beloved hot-headed chef also has a sweet side to him, as it can be seen by his judging on MasterChef Junior.  We’ll never know if he really means all the rude comments he says however it is entertaining for us. We can easily say that his level of savageness could rival Simon Cowell’s on American Idol. Both have intense burns, both are Brits and they don’t take any hostages.

Previous Post: Ayesha Khan’s Marriage Has Took The Internet by Storm
Next Post: Manchester is Blue and Bald as Pep’s Men Become Champions of the Premier League